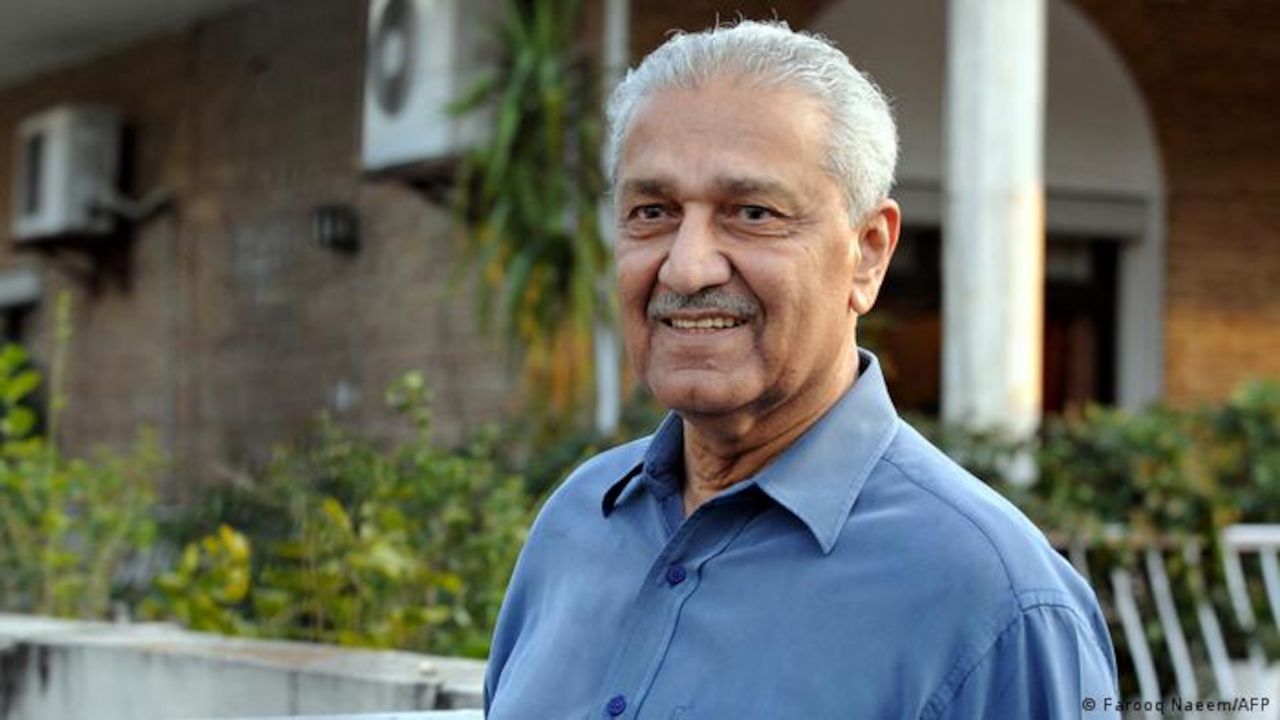 Pakistan's leading atomic scientist Abdul Qadeer Khan, who died in the capital Islamabad on Sunday after a protracted illness, carried a mixed bag of acclaims and controversies.

Hailed as an icon for creating Pakistan's military nuclear capability in the face of a four-time bigger India, Khan, commonly known as AQ Khan, had been a villain for different countries for various reasons.

For longtime rival India that joined the nuclear club long before Pakistan, in 1974, he was responsible for following the suit, whereas, for the US and Europe, he was allegedly involved in "selling" nuclear secrets to the "rogue" nations like Libya, Iran, and North Korea.

The allegations gained weight by Khan's "sorry" to the nation in an unscheduled broadcast in February 2004, taking "full responsibility" for his actions.

"I take full responsibility for my actions and seek your pardon," a somber and disturbed Khan said, reading from a previously prepared statement, "admitting" that he had been involved in nuclear proliferation.

His supporters, nonetheless, believed he was forced to take the responsibility for the actions of "others," whereas Pakistan's then military ruler Gen. Pervez Musharraf claimed that the "confession" had not only "saved" Khan himself but the country's nuclear program as well.

Pakistan silently developed its own nuclear capability in the 1980s, when it was an ally of the US in the first Afghan war against the crumbling Soviet Union.

According to the Sweden-based Stockholm International Peace Research Institute, India currently possesses between 80 and 100 nuclear warheads, while Pakistan holds between 90 and 110.

Meanwhile, a number of international think tanks, which blame China for assisting Pakistan's nuclear program, believe the size of Islamabad's nuclear arsenal will cross the 200-mark within the next five years.

- From hero to house arrest

Khan had been taken to his house located in a high-end Islamabad neighborhood and put under house arrest in 2004. Although he was officially released in 2009 after the Islamabad High Court declared his detention illegal, his movement remained deeply restricted, but he was allowed to use phone.

Anadolu Agency interviewed him over the phone in March 2017, following New Delhi's claims that Islamabad's alleged "patronage of international terrorists" might enable them to get hold of weapons of mass destruction.

In his interview, which was perhaps the last of his life, Khan had rejected the Indian claims.

"This kind of talk is simply ridiculous. Those who are issuing such warnings consider nuclear arsenals like a weapon shop where militants can break into and get away with them in a suitcase," Khan, who is credited with initiating the country’s nuclear weapons program in the 1970s, had told Anadolu Agency.

"Numerous phases are involved in assembling of nuclear arms. Only top nuclear scientists can do that," he had further said.

Born in 1936 in Bhopal, India, and later immigrated to Pakistan with his family in 1951, four years after the partition of the sub-continent, Khan got his early education in the southern port city of Karachi and attended prestigious DJ Science College Karachi.

In 1972, he earned a doctorate in metallurgical engineering from the Catholic University of Leuven in Belgium.

Khan married Hendrina Reterink, a British national who had been born to Dutch expatriate parents in South Africa, in 1964. The couple had two daughters.

He joined Pakistan's fledgling nuclear program in 1976 on the reported request of then Prime Minister Zulfikar Ali Bhutto, two years after India conducted its first "successful" nuclear test in 1974.

Khan at that time was working in the Netherlands.

Under Khan's leadership, Islamabad is believed to have silently developed its nuclear program in the 1980s but did not officially test it until May 1998.

In 1986, tensions soared between the two countries as India launched Operation Brasstacks – a major combined military exercise in the deserts of Rajasthan state amid insurgency and the Sikh separatist movement in the Indian province of Punjab.

Global security experts have described these war games as "bigger than any NATO exercise – and the biggest since World War II". Pakistan quickly responded with maneuvers of its forces, first mobilizing the entire 5th Corps and then the Southern Air Command, near the Indian state of Punjab. In January 1987, Pakistan put its entire nuclear installations on "high alert".

As the crisis heightened, Pakistan's then-President Zia-ul-Haq secured an invitation from the Board of Cricket Control of India to watch a cricket match between the two countries in February 1987. Although Ziaul Haq did not meet formally with then Indian Prime Minister Rajiv Gandhi, both of them met briefly at the airport lounge. According to the BBC reports, he told Gandhi that Pakistan had a nuclear bomb.

Behra Manan, an advisor to Rajiv Gandhi, later wrote that Ziaul Haq delivered a stern message that in case the conflict goes out of hand, he will use nuclear buttons. The tensions diminished soon and a month later both countries agreed to withdraw 150,000 troops in the Kashmir region, followed by a second agreement to withdraw more troops in the desert area.

Also known as "Mohsin-e-Pakistan," complaisant of Pakistan in English, Khan was the only Pakistani to receive the country's top civilian awards thrice.

Tributes poured in as soon as the news of his death broke on national and international media. He was 85.

"Abdul Qadeer Khan. Had known him personally since 1982. He helped us develop nation-saving nuclear deterrence, and a grateful nation will never forget his services in this regard," Alvi tweeted.

"Deeply saddened by the passing of Dr A Q Khan. He was loved by our nation because of his critical contribution in making us a nuclear weapon state. This has provided us security against an aggressive much larger nuclear neighbor," Premier Khan said, referring to arch-rival India.

"For the people of Pakistan he was a national icon," he added.

Khan was buried with full state honor and the national flag flew at half-mast.